Caribbean stud poker was one of the less popular poker variations during the last few decades but is now gaining serious prominence amongst several players and in many casinos. Just like any other game it is guided by strict rules that regulate the players of this wonderful game some of which include that once the player makes a wager, he is also expected to place an additional 1$ aside known as the progressive side bet.

Each player and the dealer get 5 cards each all dealt face down with the exception of a dealer card. After this process, the players are allowed to check their cards but as it is with all card games, giving out information about one’s card to another player is frowned upon. There are also only two options for players of the Caribbean stud poker which are either to raise or fold.

If the player decides to fold, he will forfeit his cards, ante bet and any side bets he makes but if he raises then he must make a wager that is exactly double the previous one he made. The dealer will then turn over the other four cards he has and if he has an ace, a king or higher, he qualifies. This means in this context, the lowest hand is the ace, king, 4, 3, 3 while the highest non-qualifying hand is the ace, queen, jack, 10 and 9. If the dealer doesn’t qualify, then the player wins even money on his ante wager and then the raise will push. 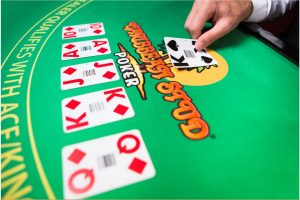 There is nothing more complicated in the game of Caribbean studs than the optimal strategy. As a matter of fact, there are no experts when it comes to applying this strategy but there are two major methods that can guide players to an interesting time on the game. The first method stipulates that the player must always raise with a pair or higher while the second plan is to always fold with less than what the dealer has in his qualifying hand.

The tricky part of this plan is the ace/kings hands. Usually, it is better when the three singletons are high or the dealer’s up card is either a jack or less and then matches at least one of the player’s cards. This ensures that the dealer’s chance of making a pair is reduced drastically. The resultant effect is a house edge of about 5.2% which is just 0.001% shy of the optimal strategy.

If this method isn’t ideal for you, try out the Wizard’s Caribbean Stud Poker Strategy which suggests that players must raise if the dealer has 2 cards that are through queen and at least one of his matches the player’s. Also the dealer’s card is an ace or king and all you have is a queen or jack on your hand, you’d better raise. Lastly if the dealer’s rank doesn’t match any of the player’s cards but he have a queen in your hand and all the dealer has for his troubles is less than your fourth largest card, you must raise.

Just as discussed earlier the player has the opportunity to make a side bet 0f 1$ which can pay for hands of a flush or even better. It must also be noted that there are several payoff tables that vary but one thing that is common across board is the progressive jackpot. They all pay 100% of the jackpot meter in the case of a royal flush and for straight flush a 10% jackpot.

Although very unlikely, two players may receive a straight flush at the same time but the first one to reach the dealer will get 10% of the meter while the second would get 10% of whatever is left after the first player have gotten his earnings. The expected return usually varies and is dependent on the size of the jackpot but on a scale of 1-10, then being the highest, I’ll give a 9 that it will be a sucker bet most of the time. Importantly, the average house edge is 26.46%

The player may also call if he makes abet for the dealer. In many casinos, the player calls the tip for as long as he can raise his bet. This is a very good strategy if he is able to raise with a marginal hand. When a player has a pair of fives or less, it is better for him to call unless he folds himself. When he has a pair of sixes, he can call except the singletons are sevens or higher, a pair of sevens is prompting him to raise except all the three singletons are six or less but when he has a pair eight or higher it is better to raise. Following this model guarantees the player at least a 50% advantage on the game.

Play to hit the biggest Jackpots ! Get started with a €1600 welcome package from All Jackpots Casino.

Get more for your money with instant bonuses on your first four deposits from All Slots Casino.

Up to £500 welcome bonus available to new BetBright Casino customers and extra casino promotions and rewards for new players.